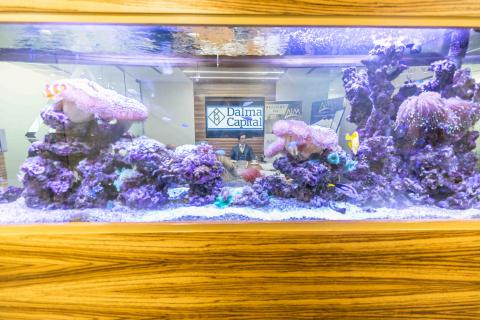 Dubai-based Dalma Capital Management’s chief executive, Zachary Cefaratti, said that a “confluence of factors” convinced the company to set up the first Dubai International Financial Centre-based Saudi Equities Fund in May this year.

“The first and foremost was the portfolio manager,” Cefaratti told Zawya during an interview at the company’s offices in the DIFC last month.

“This is a star portfolio manager in Saudi equities. So having the chance to work with him was, for us, the key driver, but of course Saudi itself was an opportunistic decision from our side as well,” Cefaratti said.

Although there are lots of Saudi equities funds already domiciled in the kingdom, Cefaratti said that this is aimed at global investors seeking exposure to the market. He said the inclusion of Saudi Arabia into MISCI’s Emerging Markets index was a “once in a lifetime opportunity” for any market, and that it was likely to drive around $45 billion of investor inflows into the kingdom.

Cefaratti argued that based on historical analysis, the inflows were likely to push price-to-earnings multiples of the Saudi stocks set for inclusion into the 17-19 times range, up from 14.5x as of November 18, according to Eikon data.

“It’s the largest market not to be included (in MSCIs’ Emerging Markets Index) yet. So this is the last big inclusion play for someone to make,” Cefaratti argued.

He also said that the changes that are set to take place in the kingdom “will not impact on companies evenly”, presenting opportunities for asset managers able to carry out fundamental analysis and pick stocks as opposed to merely creating an exchange-traded fund to track the market index.

“The fees that we're charging are quite competitive - they wouldn't have been much lower for a passive fund - but we think a passive strategy wouldn't have delivered to investors the results that they can generate from active management,” Cefaratti argued.

Dalma Capital’s first fund was a hedge fund originally incorporated in Delaware. It was raised in 2012 and was known as the Aesthus Fund, but was rebranded as the Dalma Unified Return Fund when the company relocated to Dubai in 2013, taking its name from Dalma Island in Abu Dhabi, which is known for its pearl fishing.

Cefaratti, who is the company’s principal founder and CEO, is a former child actor from California who says that he began investing the proceeds of his paid acting jobs into municipal bonds in the United States at the age of seven, and began trading equities by the time he was 11-12.

He “blew up in the dotcom” era, he admits, when he was holding lots of technology stocks, but got a job in finance aged just 16 through an internship at Washington Mutual (now owned by Chase Manhattan) and continued to work his way through university, when he opened both an insurance and mortgage brokerage, but sold both after graduating to set up a fund management company in 2011 that eventually became Dalma Capital Management.

“I always had a knack for the markets. I had a passion for investment management. I do have conviction that alpha (a measure used by fund managers to calculate the excess return they achieve over a specified benchmark such as the S&P500 or the FTSE 100) can be delivered by a skilled portfolio manager or by portfolio managers that are innovative in their strategies,” he said.

Despite this, he found himself having to change the strategy for his company’s initial fund, the Dalma Unified Return Fund, midway through its lifespan because of the difficulties in generating excess returns.

The huge injection of liquidity by central banks which has taken place across global markets since the financial crisis in late 2008 has largely found its way into financial markets, causing a bull run in most asset classes.

“When the market became quite toppish and equity long-shorts... the risk-reward became less attractive,” he said. The investment strategy for the fund, which is now closed to new investors, changed to focus on private debt.

In an email to Zawya following the interview, Cefaratti said that the fund had managed to generate alpha, with the fund generating a composite compound annualised return of 5.787 percent per annum over a six-year investment period, which he said outperformed the HRRX equity hedge fund index (HRFXEHI), which has delivered a compound annualized return of 3.46 percent over the same period.

Since then, the company has launched a number of other funds, but has also become a provider of fund platforms for hedge fund traders and private equity managers looking to execute their own strategies, providing all of the regulatory and back office services, as well as advising on risk.

Of the 12 funds listed on its website, Cefaratti said the company is managing four internally and is hosting eight on its platform. He also said there are other funds it is working on that are not listed on its site and that in total it has $525 million of assets under management.

The company employs 13 people, although two of these work directly on the Alternative Investment Management Summit – an annual summit for managers of real estate, hedge funds, private debt and private equity funds, family offices and other alternative asset managers. The summit’s 2018 edition is due to take place in Dubai next week at the end of what has been a challenging year for alternative asset managers – especially in the Middle East.

“I view it as the only tax-free - or zero tax, I should say - onshore jurisdiction in the world. When I say onshore, my definition of onshore is that the companies operating there should require substance and substantive operations in the jurisdiction. Whereas Cayman Islands, for example… in our universe we have dozens of companies in the Cayman Islands and I've never been there,” Cefaratti explained.

“Everyone in the DIFC has substance here, the DFSA is very rigorous in terms of requiring companies to have real operations here.”

He says that Dalma Capital Management has “consistently” grown during its six years in Dubai, but has focused more on performance than on asset growth as that is how its fees are structured.

“We've had a fortunate (time) considering that it's been a challenging market….for a lot of asset management firms, and for asset managers in general, particularly hedge funds,” he said.

Speaking at the Funds Forum Middle East and Emerging Markets event in Dubai earlier this month, Tarek Sakka, CEO of alternative investment manager Ajeej Capital, said that, for Saudi Arabia, the best strategy for potential investors would be “to identify those market leaders that will be the beneficiaries of this restructuring that's happening” as a result of the kingdom’s Vision 2030 implementation.

He also said opportunities would be created around regulatory changes, such as in the insurance sector, and that new sectors would develop in new or under-exploited areas such as entertainment and in catering to religious tourists.